While some customs are still practicing in the three ethnic groups in modern times, many are sidelined or fading away.

There are six minority groups in Mai Chau in which the Thai account for 65.14% of the total population. The two ethnic groups with the next largest population are, respectively, the Muong and the Hmong. After a long time settling on the same region, the characteristics of the three groups are affected by each other but they are still recognized by their garments, lifestyle, as well as other elements.

Scroll down to read some more information about the three main ethnic groups in Mai Chau. While some customs and habits are still practicing in the communities in modern times, many are sidelined or fading away.

The Muong were among the earliest migrants who moved into northern Vietnam. They build their houses both on hillside slopes and on riverbanks that are far from the main traffic. The houses have thatched roofs and split-bamboo walls. They are raised on pilings and speckled throughout the rice fields. There is usually a large front porch where the Muong do their crafts and entertain guests.

The Muong women’s traditional dress combines Vietnamese, Chinese, Thai elements. They wear a while bolero-type jacket with tight, wrist-length sleeves, and a slim skirt of ankle length. They wear their hair pulled back and knotted at the nape of their necks. The hair is covered by a white cloth tied in the back, the end of which is allowed to hang down their back. In the past, women often wove and dyed cotton cloth to make their own clothes while the men’s attire was usually purchased. Muong men were very skilled in making hunting and fishing tools.

A Muong woman is weaving on her loom (Photo: Homestay Muong Ai)

The Muong are experienced farmers in cultivating wet rice in inundated fields and terraced fields. Besides rice, they raise maize, eggplant, sesame, and tomatoes. The Muong raise pigs, chickens, and ducks for food. Fishing is important to Muong, too, because it serves supplement to their diet. The Muong are very hospitable people and enjoy welcoming guests with generous meals. If a family is wealthy, a pig will be roasted on such occasions.

They have rich folk literature with famous stories such as Đẻ Đất Đẻ Nước ( Birth of Land And Water) and rhyming songs such as Xéc Bùa and Hát Ví. Other well-known folk traditions are the cotton-planting and wrestling dances.

The Thai who reside in Mai Chau is the White Thai. They are named as such because of the white color of the upper garments of their women. Thai settlements, which are very similar to those of the Muong, must be parallel with the nearby streams or watercourses. The houses themselves are rectangular and built on pilings about 5 to 6 feet above the ground. They are constructed almost entirely from bamboo and have thatched roofs. The area underneath the house is utilized as a storage and work area and used to be a stable for domestic animals.

A typical Thai stilt house. The richer and more powerful the family is, the larger the house is.

White Thai women’s traditional outfit is a white (or green, red, purple), tight-fitting, short-sleeved jacket descending to the waist. A multi-colored belt is worn around the waist and covered the narrow band between the jacket and the skirt. The latter is a black fabric that is extended to the ankles. The jewelry consists of numerous silver bracelets and small earrings. The traditional garment of White Thai men is much more simple with black color and the jacket is buttoned down the front.

The Thai have a strong liking for festivals and hold them frequently during the year. The White Thai women have many beautiful dances that they perform in the village festivals. They dance while they sing in the rhythm of cymbals, gongs, and drums. The songs and dances are to show their honor to God of Heaven, their ancestors, and other mystical forces in their belief.

Historically, each Thai village has one or more sorcerers, called pou mor. Their role included healing the sick, interpreting the dream and bad signals, finding lost objects, and participating in every important ritual of the village.

The Hmong population in Mai Chau is less than the Thai and the Muong population. In the old-time, they lived the nomadic lifestyle but nowadays, they practice sedentary agriculture and mainly gather at Pa Co Village or Hang Kia Village which are the rugged high mountain terrains in Mai Chau.

Hmong women in Pa Co Village are working on their hemp fabric. They are painting traditional patterns by melt beeswax.

Hemp plants play an important role in Hmong life. Hmong people grow hemp and harvest the plant after three months. They dry the hemp, dip them in water, pound to soften then hand-strip them into the fibers. They twist the fibers together into long threads then weave the hemp threads into pieces of cloth and dye the cloth to create iconic indigo color.  They use the Batik technique to create patterns by melt beeswax and weave the patterns with colorful threads of green, red, black, and yellow colors.

While traditional dresses of Hmong women are outstanding and multi-colors, men’s dresses are kept simple with black color. They wear loose pants that allow them to climb the hill and dance easily. The sleeves decorated with woven patterns and cloth belts are the only accents for their outfit.

The Hmong in traditional dress are harvesting on the Avana's field

The Hmong has some types of musical instruments but the most well-known is the Qeej that is made from 6 bamboo piles. Only men are allowed to play Qeej. They are very skillful in playing this instrument. In the festivals, visitors can easily to meet Hmong men in traditional dress, dancing while playing the Qeej passionately.

Honoring local culture and preserving nature are the values that form Avana Retreat. 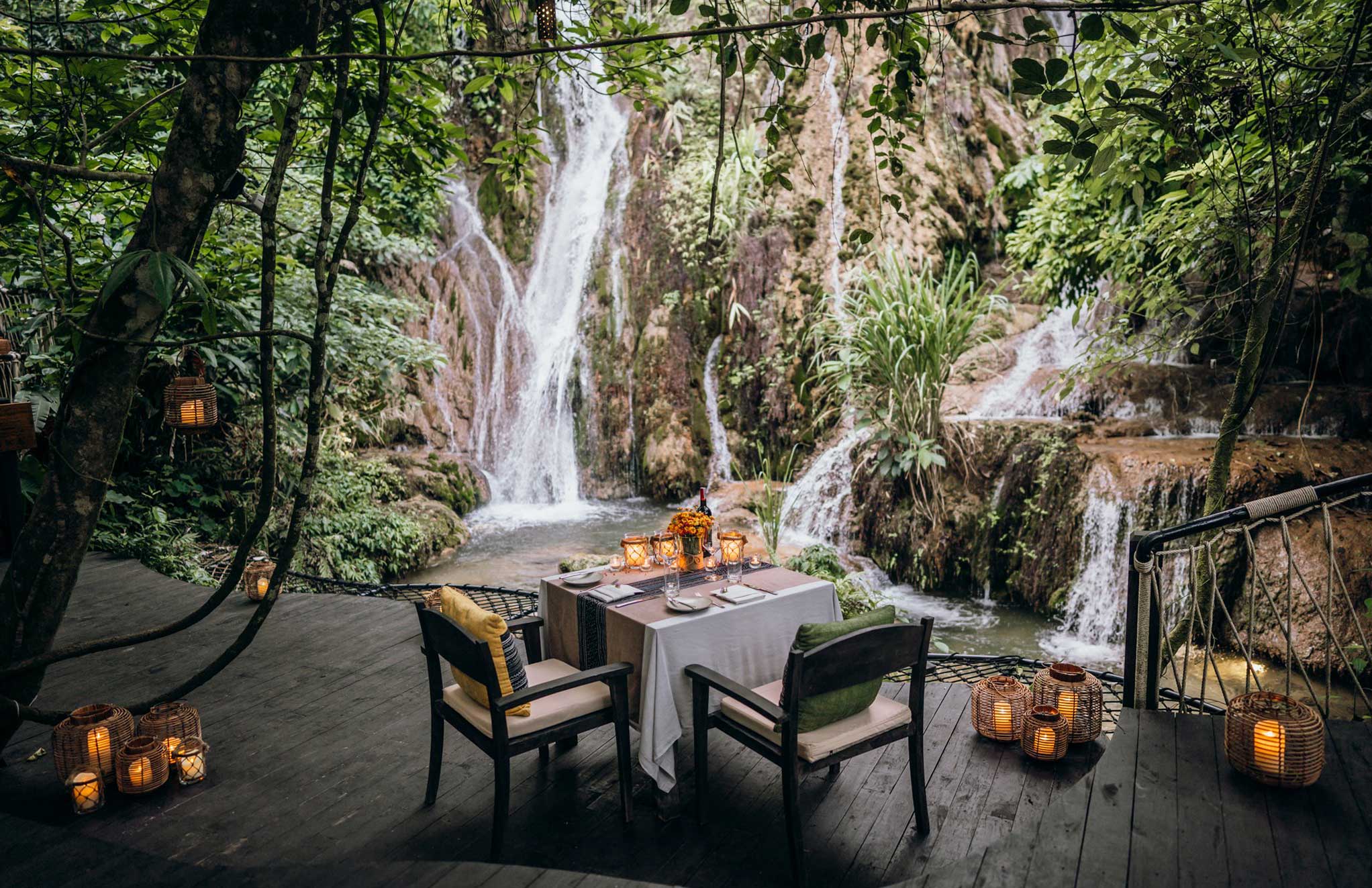 A Dash of Romance: Enjoy Exceptional Dining Experience by The Waterfall

Thanks for getting in touch

Please let us know if you are missing any service or if you have any request for extra services:

Thank you for contacting us!

We are so glad to have you with us in AVANA. Now you will be the first to know about our latest promotions and offers. Stay tuned.

Keep in touch with us!